Title: When a maximal angle among cones is nonobtuse
Speaker: Michael Orlitzky

Abstract:
Principal angles between linear subspaces have been studied for their application to statistics, numerical linear algebra, and other areas. In 2005, Iusem and Seeger defined critical angles within a single convex cone as an extension of antipodality in a compact set. Then, in 2016, Seeger and Sossa extended that notion to two cones. This was motivated in part by an application to regression analysis, but also allows their cone theory to encompass linear subspaces which are themselves convex cones.

One obstacle to computing the maximal critical angle between cones is that, in general, the maximum won't occur at generators of the cones. We show that in the special case where the maximal angle between the cones is nonobtuse, it does suffice to check only the generators. This extends some results of Iusem and Seeger, and we show that the special case can be checked at essentially no extra cost.

Finally, we point out how large eigenspaces become problematic during a search for critical angles. We prove a few results that aid in this search, and then focus on computing the maximal angle where we can rule out the nonobtuse case and avoid the associated class of hard problems. 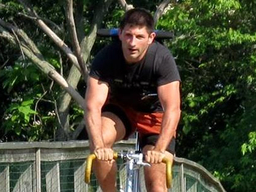