Title: Computational methods for hidden Markov models with applications
Abstract
Hidden Markov models (HMM) are used in applications when the data structure contains a latent Markov chain. However, the Fisher information matrix (FIM) of an HMM does not have a closed form. Estimating the parameters of HMM with the commonly used Fisher scoring algorithm is difficult if the FIM cannot be expressed in a closed form. An approximate Fisher scoring algorithm is proposed which uses an approximation of the exact FIM. This approximate FIM is based on the joint distribution of both observed and latent variables. The difference between the exact FIM and its approximation is investigated under various parameter value assumptions through simulations. We show the approximate Fisher scoring algorithm has a strong algebraic connection with the EM algorithm and this connection is further discussed using simulations.
To demonstrate HMMs, we propose a stock portfolio creation method that depends on HMMs. By utilizing historical stock closing values over a fixed training period, stock performances are evaluated in terms of capital gain using HMMs. Stocks are selected into a yearly portfolio based on the performances. Under out-of-sample testing, the annual capital gains of yearly portfolios from 2010 to 2018 are calculated, and their performances are compared to the S\&P 500 index. Stock prices are highly correlated but a basic HMM does not allow a covariance structure between multiple sequences. We also consider a copula to generate multivariate Markov chains which are incorporated into HMM in order to create covariance structure, and this method is demonstrated using this stock market data.
The second application is the detection of lameness among dairy cows. The data set involved in this application contains the functional measurement of forces. Due to the dissatisfactory result using the traditional functional regression, we present an alternative that incorporates functional data with HMM assuming multivariate normal sub-distributions.  This method is further discussed using simulated data.
Tags: 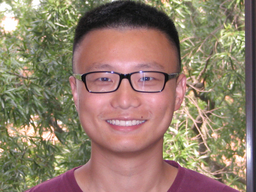