Title
Stochastic Variational Bayes for Multi-Site Daily Precipitation Data
Abstract
Hidden Markov models (HMM) are a common approach to precipitation modeling, wherein multi-site daily precipitation is assumed to be driven by a latent first-order Markov chain representing underlying weather states.  HMMs have conventionally relied on the Baum-Welch (B-W) algorithm, a modification of the Expectation Maximization (EM) algorithm, for parameter estimation. It has however been noted that Maximum Likelihood methods for graphical models tend to overfit models and are tractable only for a small class of models. We implement variational Bayes as an alternative to the B-W algorithm for parameter estimation in HMMs. Stochastic variational Bayes (SVB), which uses stochastic gradient ascent for optimizing the variational posterior, is used since coordinate ascent optimization is too slow for large datasets. We use SVB to model daily precipitation data over the Chesapeake Bay watershed, a large estuarine ecosystem bordering six different states in Eastern USA, for the rainy season months of July to September. GPM-IMERG (Integrated Multi-satellitE Retrievals for Global Precipitation Measurement) remote sensing data is used for our study, which covers the watershed with 1927 grid points at a 0.1° x 0.1° resolution.

Title
Large Deflections for Inextensible Cantilevered Beams and Plates
Abstract
In this talk, we focus on large deflections of thin, isotropic, homogeneous, cantilevered beams and cantilevered rectangular plates. Large deflections give rise to nonlinear stiffness and inertial effects.  Traditionally, elastic nonlinear models base the effect of stretching on bending on elastic restoring forces, but for cantilevers this approach does not apply, and thus we need to enforce inextensibility constraints.
In the first half of the talk, we will go over a recent model that derives the equations of motion for an inextensible beam via Hamilton's principle and the use of Lagrange multipliers. In the second half, we will see how one can attempt to obtain an analogous model for an inextensible plate by mirroring the same techniques mentioned above, while examining the hypotheses and considerations that will lead to the most accurate model. 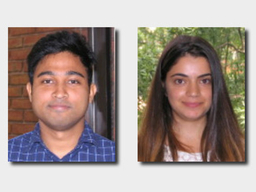