Title
Rectangular Reference Regions for the Multivariate Normal Distribution with Covariates
Abstract
Reference intervals are among the most widely used medical decision-making tools and are invaluable in the interpretation of laboratory results of patients. When there are multiple biochemical analytes measured on each patient, a multivariate reference region (MRR) is needed. Traditionally, for the multivariate normal distribution, MRRs have been constructed as ellipsoidal regions, which cannot detect component-wise extreme values. Consequently, MRRs are rarely used in actual practice. To address this drawback of ellipsoidal reference regions, some authors have developed procedures to construct rectangular MRRs. In many applications, MRRs can also depend on covariates such as a patient’s sex, age, or BMI. In this talk, we propose a solution to compute rectangular MRRs that can incorporate covariate information in a multivariate normal setting. We shall illustrate the proposed procedure through an application that seeks to construct a rectangular MRR for three components of the insulin-like growth factor (IGF) system.

Title
Stochastic Modeling and Compartment-based Method
Abstract
Reaction-diffusion systems have been widely studied in many biological and chemical problems. A compartment-based model using a continuous-time Markov process is often used to describe the underlying evolution of the system species, which can also be described by the reaction-diffusion chemical master equation (RDME). We split the spatial domain into small compartments and describe reactions within the compartment and the movement of molecules from one compartment to the neighboring ones. Stochastic simulations provide sample paths of discrete states of the system over time and help to study the compartment-based model when the analytic solution of the RDME is not feasible. We study two examples describing interesting spatial patterns, the glycolytic pathway and the Schnakenberg model. The choice of the compartment size is important and open for further study. One criterion to decide appropriate compartment size is by using the Kuramoto length of each species. We modify the stochastic simulation algorithm for the compartment-based model to record the age of each molecule and estimate the Kuramoto length by computing the mean lifetime of chemical species. 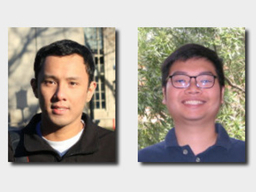